As part of its commitment to drive global football development and further strengthen and enhance ties with confederations and member associations, FIFA has announced the official opening of a new Regional Development Office today in the Caribbean to help support football development activities across the region.

Located in Christ Church, Barbados, the new FIFA Regional Development Office for the Caribbean will play a central role in the implementation and coordination of a range of football development projects to be delivered through the FIFA Forward Programme as well as ensuring a permanent FIFA presence in the Caribbean to support member association’s across the region.

Caribbean football legends Dwight Yorke and Russell Latapy also attended the ceremony and took part in a special football match involving players and representatives from across the Caribbean.

“In line with FIFA 2.0 and FIFA’s overall vision to promote and grow the game, the opening of a new regional office for FIFA in the Caribbean is an important and exciting milestone that not only further connects FIFA with member associations but will also provide hands-on local support and assistance to benefit grassroots football.

“Through our flagship development programme, FIFA Forward, FIFA is continuing to provide tailored support to confederations and member associations and making a real impact in driving football development around the world. The opening of a new office in the Caribbean is another important milestone for FIFA and will ensure that FIFA’s development work continues to make a real and lasting impact in developing football and inspiring a new generation of players throughout the region.” 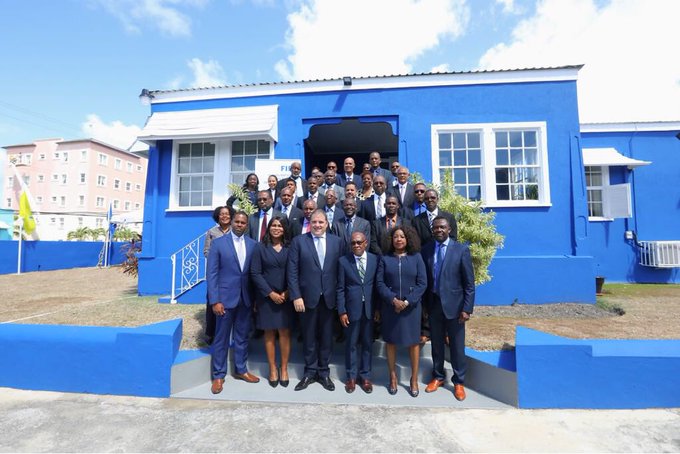 “For the first time, there’s an alignment with UNCAF for Central America. Thanks to this regional office, we can now align our strategic plans and focus on similar areas, like youth football which falls in line with CONCACAF”.

FIFA Development Director for the Caribbean and Africa Region Veron Mosengo-Omba also spoke at the ceremony and highlighted the prime role of this regional office which is “to advise the member associations in the region and best support them with their COAs (Contracts of Agreed Objectives) and to build their football development projects on the ground”.

“This regional office matters for what we do as a union. If we operate as a united frame we will be more efficient. This office is the beginning of a regional central point when it comes to football. We are proud to have it here in Barbados.”

The Caribbean office is the ninth regional development office to be opened by FIFA since the creation of the FIFA Forward Development Programme in 2016 with regional FIFA offices having already been established in India, Malaysia, New Zealand, Panama, Paraguay, Senegal, South Africa and the United Arab Emirates. A tenth regional office will be also launched in Addis Ababa in the summer.

TROPICS MAGAZINE™ is the first and award-winning bi-lingual (English + French) online/print magazine from Africa which caters to a global community of leading businessmen and women, fashionistas and trendsetters.

Cheery Ways to Use Yellow in Your Decor

Prev Next
Leave A Reply
Cancel Reply
Stay With Us

Design Essentials Hair Care Systems on the catwalk in…